This Friday is another guest post by an author, this time Margret Helgadottir. It is about writing her character Iselin from her short story Shadow, self-harm and The Moomins and is part of the Impossible Spaces Blog Tour (if you click on the button you can read all the other posts in the tour - I shall be contributing two guest posts very soon too, though I'll tell you more about those as they happen).

Margret is an Icelandic-Norwegian writer who has travelled all over the world and has just started to write fiction in English. She mainly writes speculative fiction and is very much inspired by Nordic culture, climate and folklore. Shadow is about a young woman called Islelin who thanks to both nature and nurture has always felt isolated and different.When she meets freedom fighter of sorts, Berge, she is flung into an alternate, desolate world where lizard creatures, not humans, are the apex predators but could it be that in this hopeless future is where her salvation lies?

"I’ve had the image of Iselin in my head for a long time. Iselin is an old Norwegian female name that means dream or vision. Originally I wanted it to be more a chaotic and confusing horror story that travelled through visions and dimensions, with Iselin as the key factor. Then, as I started to write, a different narrative wanted to be told. This often happens in my writing. I’ve started to spend less time on the planning of my stories, because they often seem to have a life on their own. You asked me to take pictures of my notes. For this story I only had five small sentences, in Norwegian, and the only thing that I used was that Iselin entered an elevator on her way home late one night. 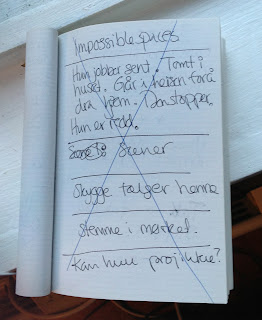 I’ve had the image of a scarred young woman who hides from the world, too scared to pop her head up, for a long time, and I’ve also played with ideas of how an outsider would react if suddenly almost all the people were gone and the person had no society to avoid. Would this encourage the person to take up more space in the world, and no longer fear being visible? You know, like plants do when you give them a larger pot and more earth. Their roots will stretch and they will grow larger and blossom. But if they’re forced to stay in the same tiny pot forever, they will remain the same size until they die, and maybe never blossom fully.
In hindsight, I see that the story about Iselin is a sad story about self-preservation. Iselin is a young woman scarred mentally and physically by her childhood. She’s been raised to not be a burden to her parents and has always managed on her own. As an adult, she’s been sucked into a vicious spiral: she shuns contact with people and they in return avoid her, leading to her feeling even more isolated and misunderstood so that she redoubles her efforts to stay away from people, and so on. Getting stuck in such a self-reinforcing spiral is much easier than people think.

Iselin learned to keep all her emotions on the inside early on, so she wouldn’t provoke or disturb her parents. This has stuck with her. The emotions are locked up inside her and someone seems to have thrown the key far away. She suffers, but she doesn’t know how to deal with it. She tries to ease her pain with substitutes, like many people do when life gets unbearable or they want to escape their heavy thoughts. However, she does not resort to starving herself, drinking large quantities of alcohol, losing herself in drug-induced highs, or throwing herself from cliffs. No, Iselin works until she drops, and when that doesn’t help, she cuts herself with razor blades. Numb and exhausted, she drags herself from day to day, hoping no one will notice her, yet secretly longing to be seen.

The world sees only a stone face. Iselin has not only become a shadow of herself, she’s also a shadow in the world. She is like the shy, scared little girl in Finnish author Tove Jansson’s story The Invisible Child, from her book Tales from Moominvalley (1962). Because an adult made sarcastic comments about her, this girl became totally invisible. Under the kind care of the Moomin family, she became secure enough to act spontaneously on her emotions and this led to her gradually becoming visible again. The story about Iselin spins around the same ideas of invisibility. The guerrilla soldier Berge is Iselin’s tolerant, accepting and generous Moomin family. Berge is an old Norwegian name that means “to save”.

But Berge has his own scars and is in many ways a shadow too. Rachel, you pointed out that the idea of fate is very strong in the story. You said that when Berge rubs the glove he wears to hide his scales over Iselin’s scars, it feels as if they were meant to save each other from themselves. Thanks for this. You’re right. Berge and Iselin are both miserable and lonely lost souls who live in the shadows of their own worlds. It’s only when they follow their instincts—Berge when he goes to the office building, Iselin when she chooses to follow Berge—that they find the solution. Shadow is all about Iselin and Berge helping each other to come out of the shadows, but on a macro level, the story is about something else: lost souls and a mysterious helping hand from another dimension that responds to their unvoiced cries for help. At least I hope it became such a story. I’ll leave it to the readers to decide whether I have succeeded in this or not.

So, Shadow evolved from an idea for a horror story to a tale about hope, about how it can be possible to spot the light at the end of the tunnel, regardless of how hopeless the situation is, regardless of how lost you feel. Follow your instincts; follow the good guys; be brave enough to step out of the shadows. There are many kind-hearted lost souls walking the streets, scarred from their own battles, who’d like to meet you."

Send Margret your love via her blog http://margrethelgadottir.wordpress.com and also on twitter @MaHelgad.

Also if you are a goodreads user / reviewer you can win a copy of Impossible Spaces here!
Posted by Unknown at 09:06

I'm a writer, comic book geek and music lover. I write fantasy, horror, mysteries, steampunk, supernatural and surreal stories. I'm also a sucker for witty romances and anything with lots of heart.

I secretly wish I was an artist so I sometimes draw for fun.

If I was in a 1960s girl group I'd write a song about how I want to marry Frank Gorshin as Riddler aka Edward Nygma is my fictional crush.

Comments and followers are more than welcome and very much appreciated!