Hi guys! I've decided to get an extra early start with my Comica / Cape / Vintage Short Graphic Story entry so that I have no excuse for any mistakes. I also thought I'd share my process with you (seeing as I am supposed to be a writer after all!) All posts about my entry will be headed and tagged with Undefeated.


Don't hate me - I know you don't want to hear it - but the backbone to any good story be it a novel, a film or a comic is good planning (and YES even a four page comic is capable of having a story with a beginning, middle and end). On a practical level it just makes everything easier when you come to writing / drawing. I think the worst thing to happen once you get your creative juices flowing is to have your flow ruined because you've realised an epic hole in your story.

I think finding an idea that works is the hardest part! There are so many one-line ideas that sound cool that when you actually think them out suddenly become a lot harder to make sense of, are too long or too short for what you want them for...if you can think of an idea at all! There are some days when they just won't come and the more you force them the worse they get. At film school we had to generate ideas all the time. Somehow this usually involved picking words out of tobacco tins - the more random the words the better (coat hanger sandwich anyone?). Random pictures (paintings, photos) are also good. I really recommend going for walks. It is amazing the things you notice when you have no predetermined destination. Like my old tutor Brian used to say, you can't be a writer sat in your ivory tower, you have to live life to write life.

Okay so you think you have an idea! WRITE IT DOWN! Tony Grisoni says it's not an idea if it's not written down. And it's so true. You can't see the flaws if it's not written down. You also can't see what you like about it and that's just as important. Write it out then leave it - a day, a week, a month, however long it takes for you to forget bits - then come back to it and see if it still makes sense and that you still like it. If it does then you can write out the script!

Take as long as it takes - you want your script to be as perfect as it can be so that you don't have to worry about correcting mistakes when you're drawing - when you're drawing all you want to be worrying about are artistic choices, not whether your character motivations are wrong...though if it's been a year and you still haven't produced four pages you're in trouble. I use Final Draft for writing my graphic novel scripts however 2000AD and Dark Horse both have example scripts for you to study the format of if you don't have a script program. I recommend not writing more than seven panels per page unless it is an indie comic, in which case the world is your oyster (though I wouldn't go over twelve). Basically the more panels per page the less space there is for picture detail and dialogue. Look at the kind of graphic novels you want yours to be like and see how many panels they use per page and how they vary this number for conversations / action / heart felt moments.

Things that stop you writing:
- TV
- The Internet
- Talking to people
- Cats

Take yourself to somewhere solitary and comfortable (though not so comfortable that you're falling asleep) and either write in silence or to music (some people find even music too distracting). Joss Whedon says not to write to music with lyrics but I actually find music with lyrics very inspiring - do what's best for you - Joss recommends film soundtracks...the running joke is if you need a rousing soundtrack pick The Dark Knight. I make playlists for every project I write and play them on repeat. When I'm stressed I play calming music. I'm kind of stressed at the moment hence why in the picture the music playing is Belle and Sebastian.

If you're visually motivated make mood and character boards that you can look at when you need an inspiration kick. In fact just the act of selecting pictures and assembling them will help focus what it is you want to write. Below are two boards I made - one for The Automated Heart and one for Paradise. 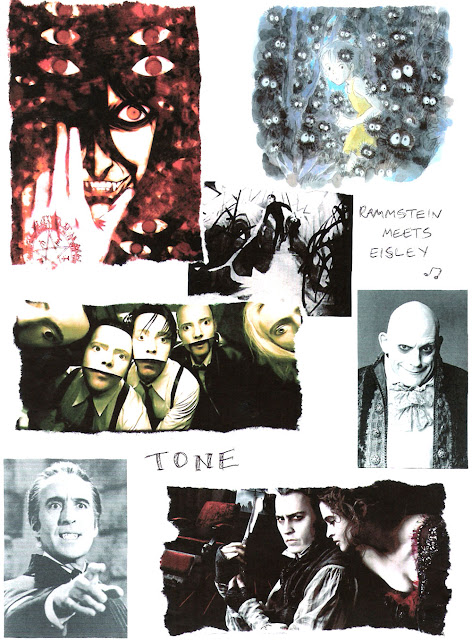 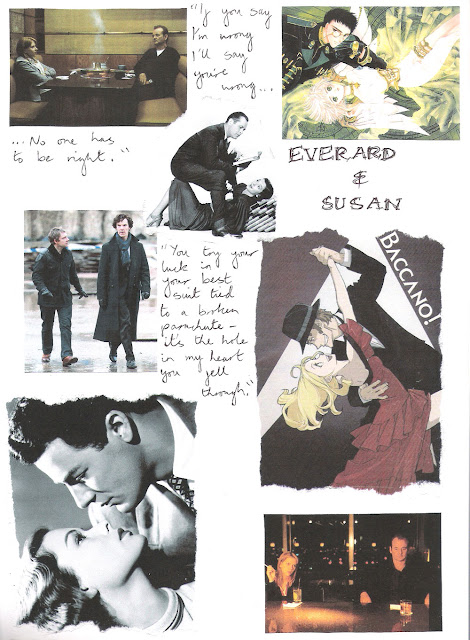 Once you've got a good script you can sketch out your page layouts. This can be as rough or as tidy as you like - it's purely for you and is so you can see if what you've written will actually fit / look like how you imagined it would when you were writing it. Think of it as the graphic story equivalent of a storyboard. If you have an indefinite amount of pages this stage doesn't matter so much however if, like me, you only have four pages it's essential! What could be worse than putting all that effort into drawing three of your four pages only to discover you have too much to fit on the last page? Below is mine for another idea I had. Even though it's only on the back of a piece of scrap paper it helped me realise that some of the panels that looked cool in my head wouldn't work so well on a piece of paper with the other panels around it. 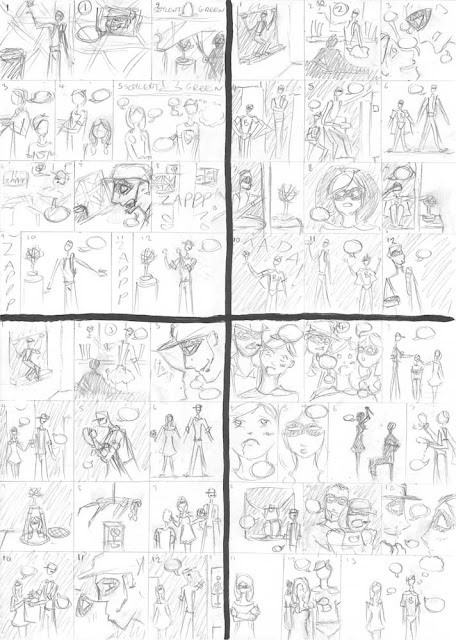 See you next time for the character design stage!
Posted by Unknown at 20:17

I'm a writer, comic book geek and music lover. I write fantasy, horror, mysteries, steampunk, supernatural and surreal stories. I'm also a sucker for witty romances and anything with lots of heart.

I secretly wish I was an artist so I sometimes draw for fun.

If I was in a 1960s girl group I'd write a song about how I want to marry Frank Gorshin as Riddler aka Edward Nygma is my fictional crush.

Comments and followers are more than welcome and very much appreciated!